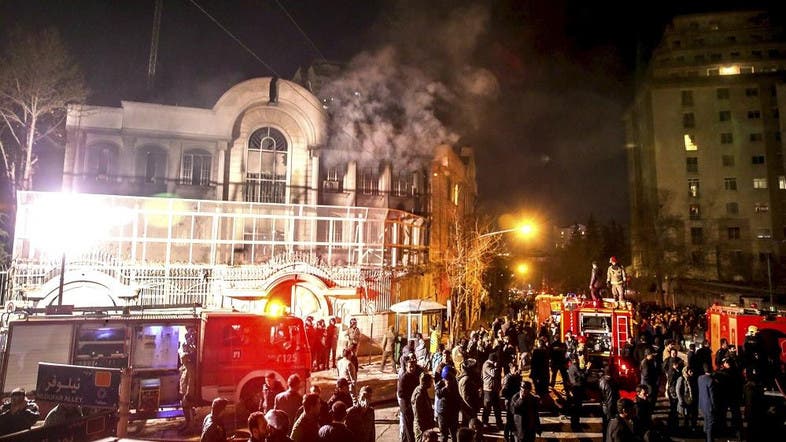 The report said that a lawyer associated with the case said the prison sentences for the 10 attackers, ranging from three to six months each, was approved by the appeals court.

The report’s unnamed attorney also noted that four of the defendants were clerics and therefore would have to appear before the Special Clerical Court. Their trial began in July 2016.

In January 2016, protesters in Iran ransacked and set fire to the Saudi embassy in Tehran and also attacked a Saudi consulate in the northeastern city of Mashhad.

The sentences were upheld after closed-door trials, more than a year and a half of several delays in the judicial process. After the Iranian president demanded a public trial of those involved, his country faced firm reactions from Saudi Arabia and the Gulf states, followed by a wave of Arab boycotts and global condemnations.

Over the past year and a half, Iran’s judiciary has repeatedly said that dozens of defendants were initially arrested but then immediately released due to “insufficient evidence” or because they were “angry” or had “revolutionary enthusiasm” during the attack on the embassy.

Iranian authorities have arrested the cleric and preacher Hassan Kurdmihan amid allegations that he led the attack on the Saudi embassy in Tehran, following the execution of the Saudi Shiite preacher Nimr al-Nimr.

It is claimed that Kurdmihan, who is also the director of religious institutions in Tehran and Karaj, was involved in the attack that saw angry crowds set fire to the building.

Member of the Iranian parliament’s national security and foreign affairs commission, Mohammadreza Mohseni Sani said Kurdmihan was arrested after returning to Iran from Syria where he had been serving in the ranks of the Revolutionary Guard fighting alongside forces loyal to Bashar al-Assad.