Al-Arabia – US President Donald Trump issued a veiled threat against Iran on Tuesday, warning Tehran to adhere to the terms of a nuclear deal with world powers or else face “big, big problems.”

A week after certifying Iran as complying with the 2015 agreement negotiated by Democratic President Barack Obama, Trump made clear to thousands of raucous supporters that he remains extremely wary of Tehran.

Trump administration officials, briefing reporters last week, said new economic sanctions against Iran were being prepared over its ballistic missile program and for contributing to regional tensions. Trump devoted part of his speech in Youngstown, Ohio, to Iran.

“If that deal doesn’t conform to what it’s supposed to conform to, it’s going to be big, big problems for them. That I can tell you. Believe me,” Trump said.

“You would have thought they would have said ‘thank you United States. We really love you very much.’ Instead, they’ve become emboldened. That won’t take place much longer,” he said.

Fresh from a rare legislative victory in Washington when the Senate voted to start a debate on repealing Obamacare, Trump called on Democrats to end their opposition to his efforts but doubted they would. 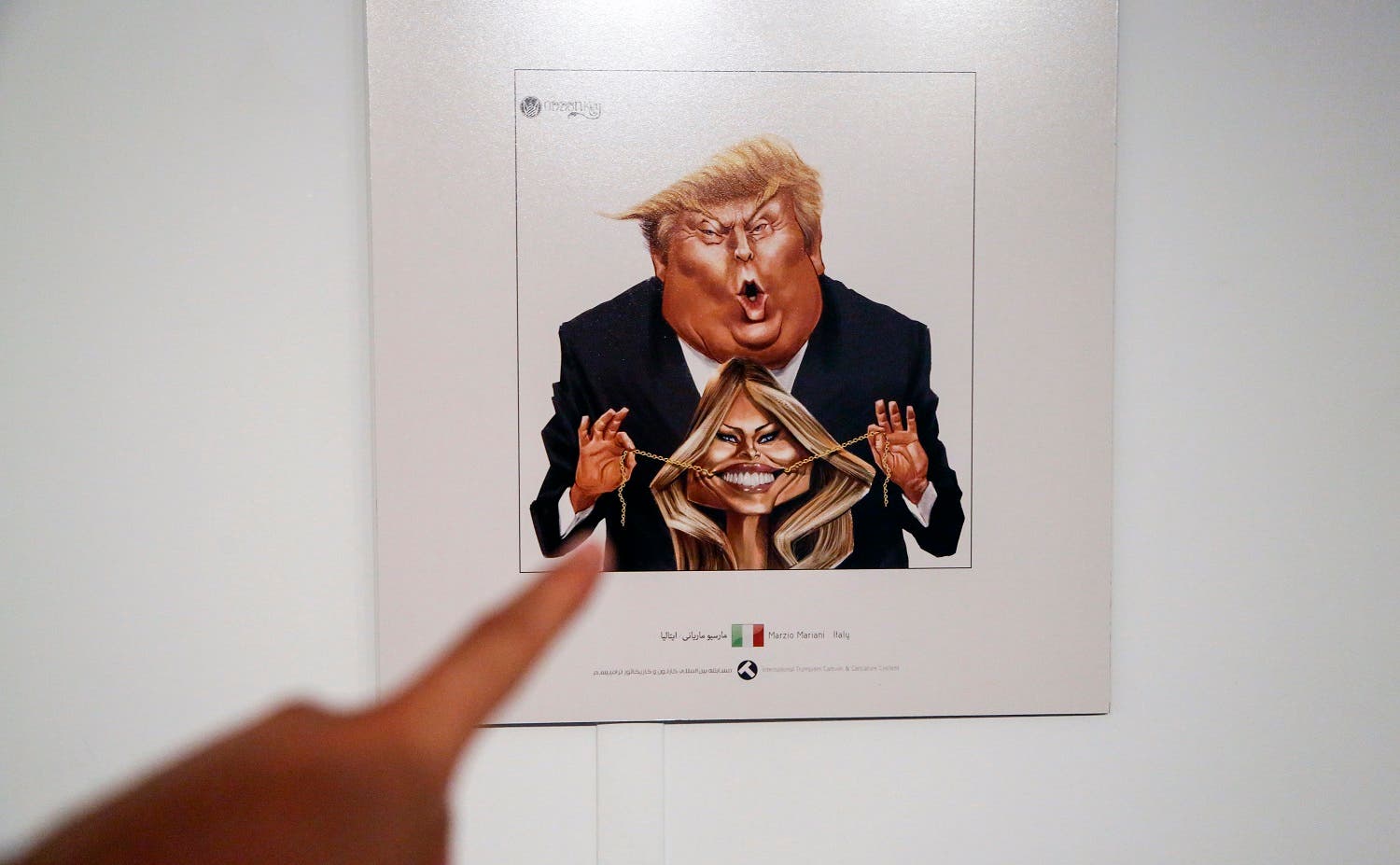 This July 3, 2017 photo shows a cartoon of President Trump and Melania on display at an exhibition of Iran’s 2017 International Trumpism cartoon and caricature contest, in Tehran. (AFP)

“It’s time for Democrats to stop resisting. That’s their term, resist, resist. They have to do finally what’s right for the American people, but probably we’ll do it ourselves,” he said. Trump used his speech to revisit some of the themes that helped him to his improbable victory in the presidential election in November.

He railed against “radical Islamic terrorists” and vowed he wanted to keep them from entering the United States after the “total devastation” he said they had caused in Europe. “We only want to admit those into our country who share our values,” Trump said.

Trump came to Ohio amid a simmering feud with his attorney general, Jeff Sessions, and facing a prolonged investigation into Russian meddling in the presidential election. He cast himself as an anti-establishment figure fighting entrenched special interests in Washington, a point that his wife, Melania Trump, stressed when she introduced him on stage.

“Washington has fought him every step of the way, but I know my husband and he will never give up,” she said. Throughout the crowd were reminders of the campaign from chants of “drain the swamp” to “CNN sucks.” Several protesters were ejected, including a youth waving a Soviet-style flag. “Boy, he’s a young one,” Trump said. “He’s going back home to mommy. And I bet mommy voted for us.”

Trump rejected criticism that he has a style as president that is not politically correct. He routinely draws criticism for his tweets.

“I’d say with the exception of the late great Abraham Lincoln, I can be more presidential than any president that’s held this office,” he said. “But we have to move a little faster than that. We will never be beholden to the lobbyists or the special interests.”