Iran Retaliates With Entry Ban on US Citizens as Controversy Swirls

In a statement Saturday, Iran’s Foreign Ministry directly linked its ban to Trump’s order, which Tehran called “an obvious insult to the Islamic world.” The statement predicted that Trump’s order “will be recorded in history as a big gift to extremists and their supporters.”

Tehran further cautioned that the U.S. ban, set Friday by Trump at 120 days, would not make America safer. The ministry also said its retaliatory measures would remain in place until the U.S. restrictions were lifted.

The Iranian reaction was the first official response from any of the seven Muslim-majority nations named in Trump’s ban. The other six countries are Iraq, Libya, Syria, Sudan, Yemen and Somalia. 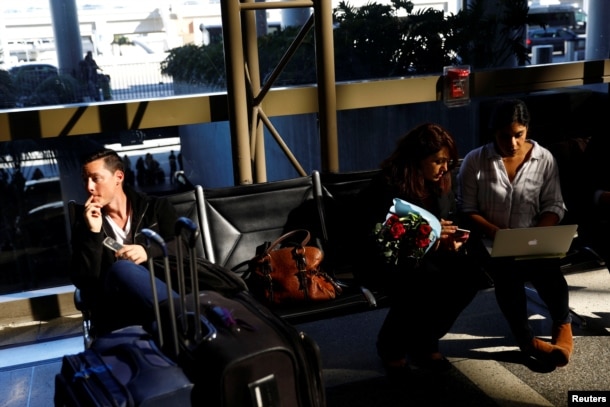 A passenger, left, waits in Los Angeles International Airport for his girlfriend, who was born in Iran but holds a Canadian passport and had not been allowed entry to the U.S. after vacationing in Thailand. Meanwhile, an attorney works to help family members of Sarah Saedian, center right, also affected by a presidential executive order on immigration, Jan. 28, 2017.

Trump’s order suspends entry to the United States of all refugees for four months and bars Syrian refugees indefinitely. It also blocks green-card holders from the seven countries from re-entering U.S. territory, while directing U.S. agencies to fast-track entry procedures from minority Christians in those countries.

The White House said the “extreme vetting” measures would protect the U.S. “from foreign nationals entering from countries compromised by terrorism.”

Hours after Trump’s decree, news outlets began reporting from U.S. airports on individuals directly affected by Trump’s ban, including the case of an Iraqi national who worked as a translator for the U.S. Army after American forces invaded Iraq in 2003.

Hameed Khalid Darweesh, who like many other U.S. contractors was eventually allowed safe haven in the United States, was detained overnight Friday along with another Iraqi national at New York’s John F. Kennedy International Airport. Hours later, lawyers filed an emergency motion that gained Darweesh’s release, while the other refugee remained in detention.

“What I do for this country? They put handcuffs on,” Darweesh said. “You know how many [U.S.] soldiers I touch by this hand?” 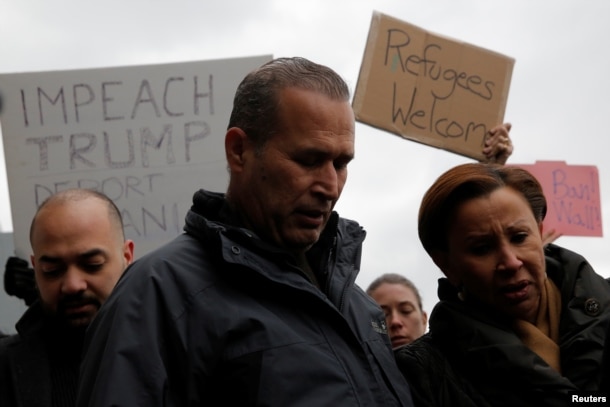 Darweesh’s lawyers also filed emergency motions to extend the lawsuit on behalf of their client to include all refugees found to have been detained at U.S. airports since Trump issued his order late Friday.

The New York Times quoted airport security officials as saying nine travelers had been detained by midday Saturday at Kennedy’s Terminal 7. Two others were in reported in custody at Terminal 4, sparking small, peaceful protests at the huge facility.

Elsewhere, security officials in Cairo said an Iraqi family of five had been barred from boarding a flight for New York, while Qatar Airways warned U.S.-bound travelers they would need a diplomatic visa or other official documentation before boarding U.S. flights. Authorities said a sixth U.S.-bound migrant, identified as a Yemeni national, had left the airport and returned to the capital.

Others responded to the ban with praise, including far-right Dutch lawmaker Geert Wilders, who tweeted that the ban “is the only way to stay safe.”

In New York, Kathleen Ganci, whose firefighter husband was killed in the 2001 World Trade Center attacks, told The New York Times, “I don’t care how difficult [the ban] makes it for these people to come over. I don’t want other Americans to go through what I did — because we have to care for our own first, before we care for others.”

” ‘Extreme vetting’ is just a euphemism for discriminating against Muslims,” he said.

For its part, the U.S. State Department said Saturday that it was working to put the executive order into effect, telling VOA the “safety and security of the American people always comes first.”

Adding to confusion surrounding the decree, a spokeswoman for the Department of Homeland Security told Reuters green-card holders would eventually be included in the ban. But spokeswoman Gillian Christensen did not provide details.

On Capitol Hill, the leading Democrat on the House Homeland Security Committee, Representative Bennie Thompson of Mississippi, called the refugee ban “shameful” and said it “does nothing to enhance homeland security.” He also warned that the ban would have a “destabilizing effect on our relationship with our allies and partners in the fight against terrorism.” 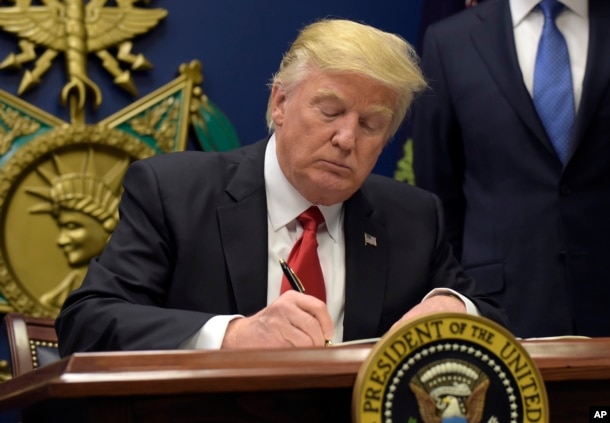 President Donald Trump signs an executive order on extreme vetting during an event at the Pentagon in Washington, Jan. 27, 2017.

The president said Friday that only people who support the United States should be allowed into the country. The executive order he signed discussed identification and verification procedures that U.S. consular officers should use in extensive detail.

“We don’t want them here,” Trump said. “We want to make sure that we are not admitting into our country the very threats our soldiers are fighting overseas. We only want to admit those into our country who will support our country and love deeply our people.”

Trump had pledged during his campaign for the presidency that, if elected, he would temporarily suspend refugee and immigration programs from countries or regions with a “proven history of terrorism” against the U.S. or its allies.