Sweatshop Workers in Collapsed Building in Iran Left Without Jobs

Radiozamaneh – The 17-story building that collapsed on 19 Jan in Tehran, Iran, was home to 560 small business units, many of them repairing workshops and sweatshops. The workers who worked in the building are now left unemployed without benefits. 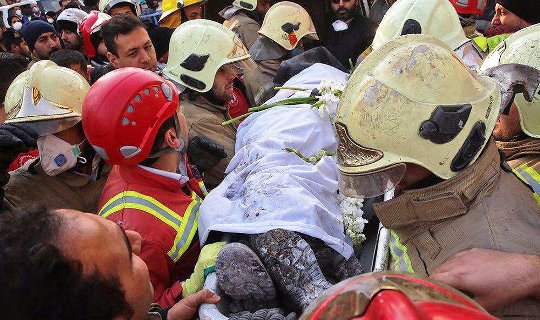 The body of a victim is excavated from the collapsed building rubble and carried by firefighters.

The Plasco building collapsed after an explosion and fire possibly due to an unsafe gas-burning heating system. Iranian state media has been very reluctant to report on the life stories of those who are buried under the rubble.

The tragedy unfolds with each body that is excavated: firefighter and workers, the story of loved ones left without a breadwinner. There are also many workers, the number unknown, who have lost jobs.

The Plasco building in Iran’s capital has become a symbol for lack of government accountability towards citizens and workers’ safety.

Read More: Building on fire collapsed in Tehran; many firefighters are feared dead

Gholam Reza Abbasi, the head of the Supreme Labour Council says that at least %70 of workers in Plasco were labourers in sweatshops and not insured under the Ministry of Labour and Social Affairs guidelines. As such, these workers are not even eligible for unemployment insurance, he maintains.

Abbasi blames the Iranian minister of Labour and Social Affairs, Ali Rabei, for lying to the public that his ministry will provide unemployment insurances to the workers in Plasco who have lost job. He goes on to say that most labourers in Plasco were working black-market underpaid jobs outside the legal requirements of the ministry and the ministry will never provide them with benefits.

With the news of Plasco building collapse in the headlines the poor working conditions of the building’s sweatshop workers has become relevant to the general public. 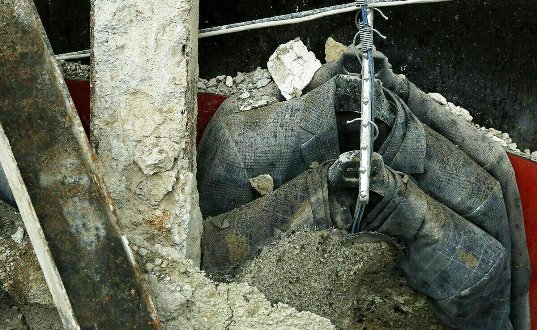 Many of the sweatshops in the collapsed Plasco building were menswear workshops. These are the remains of one of them under the rubble.

The accountability of government officials is also a concern for Iranians who are active in social media. Many of them blame Tehran City Council and the mayor, Mohammad Bagher Ghalibaf, who is responsible for the safety and fire prevention at high rises in Tehran.

Others are now linking this national tragedy to government corruption and also blaming the Ministry of Labour and Social Affairs for the lack of regard for workers’ rights.

With the news of Plasco, the most recent Labor Code reform bill which attempts to restrict rights of the Iranian workers has also become relevant.

The Labor Code reform bill was first introduced during the presidency of Mahmoud Ahmadinejad and reappeared in Hassan Rohani’s government. Rohani administration finally suspended the bill in Jan 2017, after many workers and union activists opposed it. The most notable opposition came from workers who on 19 Nov 2016 staged a sit-in, on the floors in front of the Iranian parliament.

As such, the ditching of the Labor Code reform bill has not made the life of the workers in Iran any easier; it was merely a strategic political decision in response to workers anger and frustration.

Every month in the past year, news outlets have been reporting on the loss of jobs, firing of workers and unpaid wages in Iranian factories, workshops and sweatshops.

Most recently the workers in the Heavy Equipment Production Company (HEPCO) went on strike for 12 days in Jan 2017 and also took to the streets of city of Arak to demand five months of unpaid wages. HEPCO privatized and downsized its staff to 1400, dismissing many workers.

The agricultural industry has suffered the most. In the predominantly Kurdish city of Mahabad the workers of “Kesht va Sanat” have not received their wages and benefits for the past 16 months; that is the whole of 2016 and the last four months of 2015. They staged a sit-in in front of the factory for 45 days in Dec 2016 and Jan 2017. This factory too was privatized and half of its 200 workers were dismissed without paying off of due wages.

The story goes on, the number of workers who are losing jobs in various industries in Iran is increasing as the government claims they are creating jobs in other sectors.

With the coming to power of each new executive government, the century old Iranian Labour Code has gone through numerous reforms after the 1979 Islamic Revolution Iran; almost always in support of the free market economy and with the cost of crushing job security and rights of workers.

Iranian Labour Code was initially designed to protect the rights of workers but it has lost its meaning over the years. The politics of free market economy is not coupled with social welfare laws. Reform bills are often introduced to protect the employers, particularly smaller business owners with 10 or less employees.

The most recent reform bill under Rohani administration has been suspended because of worker’s resistance and protests but the Ministry of Labour and Social Affairs is not really working towards recognizing the struggles of the workers across Iran.