BBC – Iran’s justice minister is looking for an “effective punishment” for criminals instead of execution, according to local media.

Mostafa Pourmohammadi said he thought the number of capital crimes should be revised, the Tasnim News Agency said.

“In fact we want to find the most effective kind of punishment so that we are able to consider replacing execution,” Mr Pourmohammadi said.

The minister said the death penalty should be kept for “corrupt people”.

“Of course, maintaining execution as a punishment is still on the agenda, but not in the numbers implemented today,” Mr Pourmohammadi said.

“The punishment of execution cannot be rejected, as there are some corrupt people in the country and there is no way for them but execution,” he added.

Image copyrightAFPImage captionIran’s Justice Minister Mostafa Pourmohammadi is considering alternatives to capital punishmentHowever, the minister observed that executions seemed to have had no deterrent effect over the past years.

Iran executed at least 977 people in 2015 – the vast majority for drug-related crimes – compared with 743 the year before, according to Amnesty International.

BBC Persian sources said that executing people for drug offences has recently sparked a debate in Iran. Users caught with small amounts of drugs intended for personal use are being sentenced to death, which some believe is excessive.

Iran’s justice system is based on Sharia law, which does not make capital punishment obligatory for drug crimes. 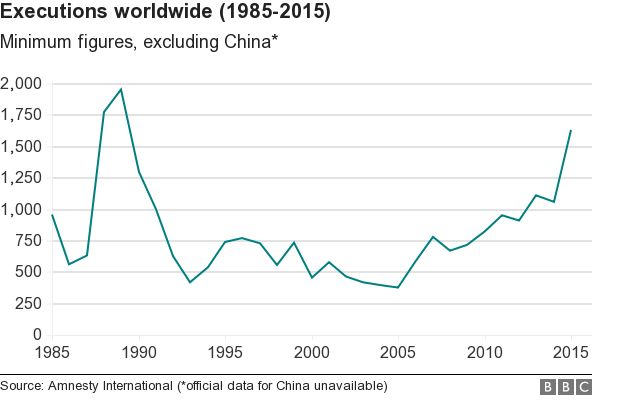 Amnesty figures released in April stated that Iran, Pakistan and Saudi Arabia are responsible for 89% of the world’s judicial executions.

However, this does not take account of China, where thousands are believed to be killed and the records kept secret.