The bloody battle in Yemen shows Iran is intent on dominion Telegraph – Last weekend Islamic State in Iraq and the Levant (Isil) claimed responsibility for a suicide bombing of an army recruitment centre in Yemen, killing between 25 and 60 pro-government forces. This attack, one of a rising number of incidents carried out by an equally growing number of players, is a clear sign that, as the conflict in Yemen continues to fester, the implications for the Western world are becoming far more serious.

While its origins go back centuries, the current struggle dates back to 2004 and an uprising led by Hussein Badr al-Din al-Houthi, a Zaidi Shia political, religious and military tribal leader. Following his death in the same year, the campaign was pursued by his family against the government through a further five Houthi wars. At the re-burial of Hussein’s remains, held some nine years later, a tribal elder said, “it wasn’t a funeral, in reality it was a gathering meant to express power”.

Death tolls keep rising in Yemen conflictPlay! 01:38
Hussein was, I would suggest, merely a pawn in a wider game, one dominated by Shia Iran’s regional strategy of sowing discord by supporting local insurgent groups. With Sunni Saudi Arabia retaliating to defend its own interests, the Houthis have become a symptom of a wider geopolitical illness afflicting the whole region.

The tragedy of Yemen is that it has become, over the decades, a sphere of contested influence. Its past gamesters were the grand masters of Empire and superpowers: East against West, Communism versus Capitalism. Today it is Iranian-backed Shia revivalism against the Sunni status quo, an emerging new order versus the existing order.

There is also a real disparity is in the way the two sides conduct themselves in the conflict. The legitimate government forces operate in plain sight. They are supported by the Saudi-led coalition, as well as leading Western countries including the US and the UK, and have the backing of a U.N. mandate.

Thus any action undertaken by the army and the coalition in support of the internationally-recognised government of President Abdrabbuh Mansour Hadi is open to scrutiny and comment. 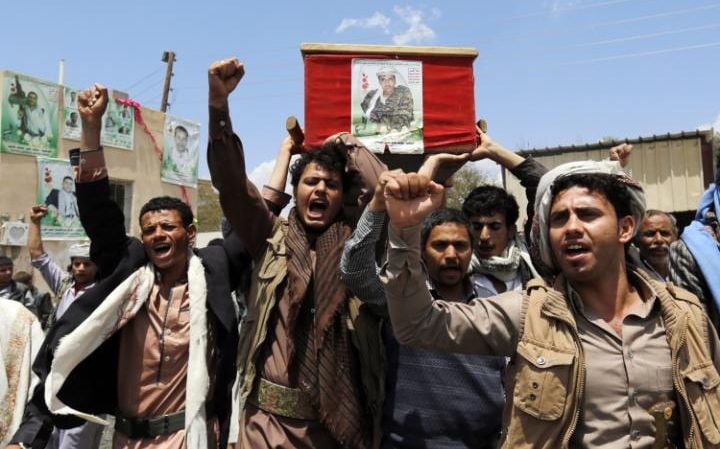 Houthi supporters carry the coffin of a militia member allegedly killed in recent fighting with Saudi-backed Yemeni forces, during the funeral procession ahead of a UN-announced ceasefire, in Sana’a, Yemen, 10 April 2016

The position of the Shia Houthi rebels, on the other hand, is less transparent. The cold hand of Iran is more prevalent in this war than is generally understood, a perception that General Qasem Soleimani, the head of the Revolutionary Guards (IRGC), would not wish changed. One rare admission by Tehran that it was involved in the conflict came in March when Brigadier General Masoud Jazayeri said that Tehran was willing to help Houthi rebels “in any way it can, and to any level necessary” against the Saudi-led coalition.

Tehran is also suspected of being behind the Houthis’ recent rejection of a U.N. peace plan in favour of creating its own “supreme political council” to challenge the legitimate government. More alarming is the role Iran is suspected of playing in advising the Houthis on battlefield tactics.

The use of child soldiers by the Houthis is well documented; it was put on the UN “list of shame” of 57 armed groups in 2011, with children making up a suspected 20 per cent of its recruits, rising in 2015 to some 30 per cent, according to Unicef. The use of civilian human shields by the rebels continues through placement of rebel units alongside civilian infrastructure. Reporters Without Borders puts the Houthi rebels only second to Isil in kidnapping journalists. “Needs must” would seem to be the applied Iranian strategy towards sustaining the Houthi rebels.

The support, therefore, that the Houthis enjoy from their northern neighbour Iran is very real, be it political, propaganda, psychological, hands-on training, specialist advisors, weaponry, sanctuary or financial support. Without it, the rebel cause would probably slump.

ISIS claims deadly car bomb attack in YemenPlay! 01:25
Moreover, Iran’s involvement in Yemen must be seen in the broader context of its strategy of challenging the existing Middle East order by generating unrest, which then allows it to manoeuvre an advantage through the resulting uncertainty. Iranian military forces and their proxies predominate in Iraq and in Syria, while other proxies have a long history of involvement in Lebanon and Gaza. Nor are these forces likely to leave the region when the immediate threats such as Isil are pushed underground or displaced, as we, the West, will.

Elsewhere in the Gulf – in countries like Bahrain, Kuwait and Saudi Arabia – Iran actively ferments unrest and religious tensions, leaving an unsettled landscape in which opportunities for mischief abound.

Yemen might not take centre stage for the moment – that honour rests with Iraq and Syria. But the West needs to understand that Iran’s involvement in Yemen is part of a wider regional conflict, one that Tehran hopes to win by overthrowing the old order and replacing it with one where Iran is better placed to dominate the region.